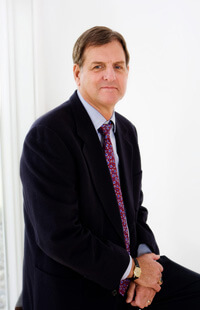 Dr. Smith was raised in Chariton, a small farming community in southern Iowa. After high school he went to the University of Iowa and then on to the Illinois College of Optometry in Chicago, graduating in 1968. In 1967 Tom married a Chariton girl – Sheryl. After graduation he spent 15 months working in a contact lens specialty practice before moving to Fergus Falls in October 1969, taking over the practice of retiring optometrist, Dr. Tyler Tillisch. Fergus Falls and the surrounding area lent itself well to private practice.

During their time in Fergus Falls, Tom was involved in several community organizations. He coached summer swimming while in college and helped Dave Lindig establish the Fergus Falls Flyers program in the early seventies. Both Sheryl & Tom were active in their church. He was also involved with the Heart O’ Lakes Camera Club in Fergus Falls. Tom was active in the Izaak Walton League when it was in Fergus Falls and was also on the original committee that led to the Prairie Wetlands Learning Center.

Tom and Sheryl have two sons. Their oldest son Tom married Fergus Falls native Pam Viger. They have lived in Alaska since 1995 where Tom is a homebuilder (North Country Builders of Alaska). Pam has worked part time at their church as director of children’s ministries, but is currently busy at home with their children. They have two daughters, Ella and Claire, and two sons, Thomas and Owen. Their youngest son went the opposite direction when he moved to Florida in 2001. He works in firearms for the Florida Department of Law Enforcement. Family in these locations gives them a great excuse to travel! Tom and Sheryl enjoy traveling, camping, photography, antiques and reading. After his retirement in August 2011, Tom and Sheryl moved to Alaska to be near their grandchildren. They are currently enjoying the warmer months in Alaska and the winter months down south.

On Jan 29, 2010, Tom was awarded the Dr. Louis Allgeyer Distinguished O.D. of the Year Award from the MN Optometric Association. This was in recognition of his continued and dedicated service to optometry and the community.